Tonight will seal the deal on who makes it back to The American Rodeo at Cowboy’s Stadium in Arlington on March 1, 2015, making these contestants one step closer to a chance at winning a Million dollars. So far, out of 115 contestants that competed in the original slack go of The American Semi-Finals, there are only 10 left to run out of the top 30. The top ten out of the Shootout round will then advance to The American and compete against the top 10 from the NFR.

This format is the most exciting out there today. It gives barrel racers a chance at big time money who may not have an opportunity to run in the WPRA/PRCA. This format also allows kids and men to compete opening up the opportunity to even more contestants. The best part of this rodeo, along with the large sum of money up for grabs is that we are basically betting the favorites (NFR crowd) that they can’t beat the underdogs (Qualifiers)… and who doesn’t love a long shot? 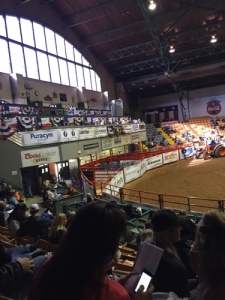 But it’s not that simple and don’t think for a second that these Qualifiers aren’t having to go through the ringer for the opportunity at running at this money. Also, I’m pretty hard pressed to say that the qualifiers are long shots. The qualifier pool is made up of some of the best barrel racers and barrel horses in the world, World Champions, Futurity Champions, Youth Champions and in some of their cases… a lot….a lot of money.

The qualifier’s journey started by paying a $500 entry fee at one of the (11) qualifier races that were held across the country. At that race they had to end up in the top ten to qualify for the semi-finals. The semifinals which are happening now in Ft. Worth, Texas started with a slack round of all of the qualifiers from across the country. Each person gets one run and to advance to the next round (shootout) they had to end up in the top 30 of the 115. The top 30 were then split up into 3 performances of 10 each. After that run (the last performance this evening Sunday 2/22), the top 10 advance to The American Rodeo in Dallas. Once at The American they will run against the top 10 from the NFR. Everyone will get one run and the top four then make it to the Final Round to run for a clean slate. There are also two exemptions that will be allowed to run. 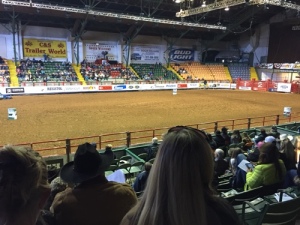 So now that I have you thoroughly confused you, it breaks down to this: The top 10 NFR girls are going to show up and compete against the Top 10 Qualifiers who have made 3 runs of their life (assuming that they only went to one qualifier which is not the case for most of these contestants, a good size group went to at least two). The champion will win $100,000 and the reserve champion will win $25,000. In the case that the champion came from the Qualifiers, they will place themselves in a pot for the chance to win $1,000,000.

Right now the Semi-Finals is being led by 9 year old Chayni Chamberlain on a grey gelding with a time of 13.907. Dat Flowin Bunny is a consistent horse that has been ridden by 3 generations of ladies, Chayni, Chayni’s Mother and Grandmother. Chayni has a direct advantage with her size and also her innocence. You can tell by the young girls glow and spirit that she is out to have fun and soak “it” all in, the Million Dollars is an after thought. The fact that she weighs 50-100 lbs lighter than an average adult barrel racer is helping her. On the flip side, she doesn’t have the experience that these other contestants have, but her consistent horse with a million dollar heart may not even make that a contributing factor.

The top 10 after two performances are: