When the Racer’s Edge show about barrel racing debuted several weeks ago on RFDTV I made sure that my DVR was set to record. The first episode which featured the ups and downs of life with Sherry Cervi was intriguing and compelling. I was excited to see the inside story, but a little disappointed to find that most of the show was from an interview that was released by Classic Equine months (maybe even a year) before. Having said that, it was still very touching, realistic and authentic and I know that not everyone has seen the Cervi interview in which she talks about the struggle of losing her husband Mike Cervi in a tragic plane wreck.

Since then I have watched several more of the episodes and I wanted to wait and watch a couple more before I wrote a review. As many of you know, I’m a advocate of anything that promotes the sport of barrel racing, even to the point that I have given more than generous reviews of shows like Texas Women and Rodeo Girls.

By far, Racer’s Edge is the best barrel racing show out there to date! In the beginning I was worried that the girls wouldn’t tell the real stories of life on the road, but was very happy to see that was not the case. I have to give Jordan (Peterson) Briggs credit for telling the story about how she left her two dogs at a gas station in Wyoming and wasn’t able to get one of them back for several weeks after a long exhaustive search. 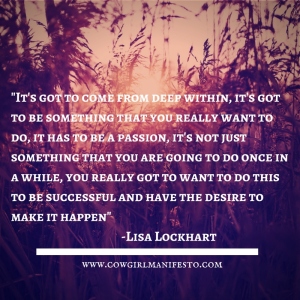 This is real life. If you’ve ever hauled late nights and long hours you know that it’s very easy to do. I can’t tell you how many times I have turned around to look in my backseat to make sure my dog was there and I don’t haul nearly as much as these girls.

So far the “Pets” episode is one of my favorites, yes I know, it’s not about barrel racing, but it’s about these barrel racers’ lives and their pets are a very large part of it. If you don’t believe it, believe me, I’ve had a hauling partner late to pick me up because she decided to stop and get her dogs some tater tots at Sonic. What I think people need to remember also is that you have to look at this show for the little stuff that you are going to pick up. For example, the little mention that Sherry gave about placement of her curb strap on her bridle. A person would normally have to pay a hefty lesson fee to have something like that brought up. It may seem like something small, but if you have ever paid for lessons or clinics you know that it’s not the whole weekend or lesson that you pay for, it’s the handful of tips and tools that you go home with. Also, the emotional recap of Jana Bean’s first NFR experience and Lisa Lockhart’s testimony of what is takes to be a winning barrel racer were among the highlights of that episode.

The exercise and physical fitness episode was refreshing because I’ve noticed over the years that the people that win and consistently are in the winners circle take this seriously and they hold themselves and their horses to the same standard. I know that in other forums people have brought up the fact that Ryann Pedone said that she started her exercise regimen because she felt like she wasn’t as athletic as some of the other barrel racers. I met Ryann for the first time in 2010 and I can tell you the girl is athletic as all get out. She can probably ride up over a horse more balanced than most and I’m always amazed how she can stay two handed nearly to the back side of a barrel and never get pitched forward. What is amazing about Ryann is her humble spirit.