To say that Mary Burger is the hottest news this year in barrel racing after a clean sweep of the Pool A qualifiers and winning the Calgary Stampede and leading the world standings by $80,000, is no far fetch. It’s not hard to find a news headline talking about the 67 year old grandma who is giving these gals a run for their money, but let me tell you something… age has nothing to do with it.

She doesn’t even realize her age, it’s not something she thinks about much. Maybe that’s why she is so successful? This isn’t something that just came on later in life. She’s always been a champion, actually she’s been a world champion (AQHA) many times over and a (PRCA/WPRA) World Champion.

Two years ago, several people and I came together to get Mary inducted into the National Cowgirl Hall of Fame. They have her listed as a Nominee, but she is yet to be inducted (hopefully soon, hint, hint, wink, wink to anyone from the Hall of Fame). I thought you all might be interested in her story that was submitted to the Hall of Fame, so here it is:

As one of the most accomplished barrel racers in professional history, Mary Burger has proven over the past 5 decades that it is not one horse or one world championship that determines the elite in the arena, but many. Mary’s extraordinary story starts as a small girl on a farm in Decatur, Indiana. One of six children, horses were commonly used on the farm and viewed as a tool. Her parents would have no idea that their young girl would “use” these horses as a means of walking again and provide her with a lifetime of career achievements.

At a young age, Mary was diagnosed with Perthes Disease, a condition of the hips that causes inflammation and arthritis like symptoms. Making it very painful and hard to get around, Mary was not able to play. Bound by crutches, her love for horses shined through. Her older brother says, “She was often seen throwing her crutches up in the air, pretending to rear.”  Left immobile, her father bought her a pony to help her get around. She rode that pony everywhere providing her a playful childhood, although partially disabled, and seeded a love and desire in her heart that has lasted a lifetime. 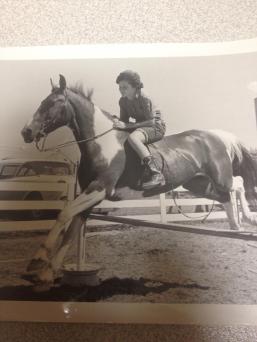 A few years after the original diagnosis, Mary was able to recover from the condition with treatment. It is said that the riding helped her hips spread and allowed her to heal, but the love was still there, so her father bought her a paint horse for 4-h horse shows and that is how it all started. Her dedication and competitiveness was consistent throughout her teenage years winning consecutive all-around titles. It wasn’t long after that she would find her niche in the horse world–Barrel Racing.

Accomplishments in the Field (lifetime achievements)

Mary Burger can be considered one of the FIRST World Champion Barrel Racers. In 1974, in her late twenties Mary won both the Inaugural World Champion Junior Barrel Racing title and the Inaugural World Champion Junior Pole Bending title for the American Quarter Horse Association (an organization originally founded in Ft. Worth in 1940) on a horse named High Bars Wimpy. High Bars Wimpy, who was trained by Mary Burger pulled off winning world championships in the Junior horse division (5 and under) in both events, a challenge for any horse of that age and an accomplishment that is seldom accomplished by speed event horses, even to this day. 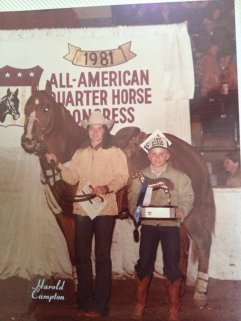 These two World Championships would only be 2 of the 10 World Championships that Mary would win over the next 4 decades. The AQHA suffered a major loss after a fire destroyed their paper records which documented many of Mary’s other career successes prior to 1993. Major Career Highlights include: 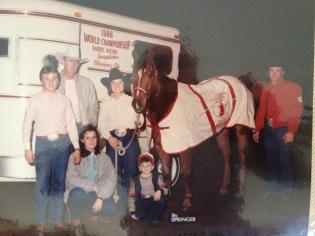 Contributions Made to the Field

Mary Burger was a woman ahead of her time in the early 70s. While most women winning on the circuit were from rodeo and horse show families, that was not the case for Mary.  Her family was made up of farmers and factory workers who didn’t stray far from their hometown of Decatur, Indiana. Her love for horses and competition would have her broaden her wings and with support from her family and her husband, Kerry, along with her young sons, Todd and Joe, she would put her bid in the ring.

Mary’s largest contribution to the sport of Barrel Racing and the idea of the American Cowgirl is her belief that if you are going to do something- you should do it well and be the best at it. Her technique of training horses with a kind and respectful hand may be what sets her aside from other barrels racers in the past or present. Mary is not one for gimmicks or quick fixes. Her technique is to provide consistent training opportunities for the horse to learn with consistent riding, proper care and exposure prior to competition. Throughout Mary’s decades of domination in the barrel racing world, she has proven over and over again raw dedication to the sport and the commitment you make to the effort, is what makes a champion. 10 World Championships and over a $1 million dollars in earnings have shown that this technique is effective and a direct contribution to the field of barrel racing.

Generally Mary starts with a young horse and trains it up to be a champion in the futurity, derby and rodeo arenas. This path alone is a challenging one. However, Mary not only is able to achieve this goal over and over on multiple horses, she does it with a riding style that looks effortless and with a minimalist philosophy. Most often you will see Mary running one handed and her horse with his head low and nose out.  Another one of Mary’s largest contributions to the sport is the sheer quantity of quality horses that she has trained that have gone on to win with other competitors.

She is nowhere near stopping any time soon. Mary at the age of 67, competes on one of the most competitive horses in the country, SadieFamousLastWords, who she bought as a two year old and trained herself using her techniques that have dominated the barrel racing world for many years.

Humble, Kind, Compassionate…. That is how most people describe Mary Burger, whether they are meeting her for the first time or they have known her for decades. She is someone who mixes in with the crowd and is not boastful. She walks with the confidence of a champion, but in her ever approachable manner can be often seen posing for people in pictures and talking with the future champions of the sport. She is often available to offer small bits of wisdom and advice to those who solicit her expertise. These are all qualities that define a “true” champion. Mary’s relationships with her equine partners are special and unique, all in their own. These relationships are based on trust, respect, and compassion. Trust that both her and her horse will do their best every time they enter the arena, an unspoken promise that Mary and her equine athlete make to each other. Respect that each will do what is requested of the other and compassion that if something goes wrong, they will fix the problem and move on to the next competition. Integrity is what carries a cowgirl like Mary Burger over 5 decades of domination in the arena. Integrity to continue on with a sport despite its growth and evolution, integrity to continue on with an animal, integrity to continue despite age, and most of all, integrity to follow a dream of a young girl in Decatur, Indiana.