I’m forecasting major Starbucks withdrawals with the coming of the new year. It happens every year after my body becomes accustomed to about 3 coffee drinks a week. Thanks to the Starbucks gift cards that make it to me in various Christmas Cards. I have already drained my reservoir of gifted coffee drinks. The only gift card left in my wallet has a remaining balance of .12 cents. Raising the question, Do I go and use the balance on the card as an excuse to spend another $5 on a coffee drink? I very rarely even finish them before they are too cold to drink? 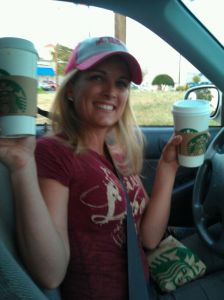 ks right? Well To me its 1 exhibition (time only, for all you out west), or a half bag of grain, or a 1 way trip worth of fuel to my closest jackpot, or 1/5 of the entry fee for the next jackpot. When I put it that way, it seems like a lot. It’s crazy to think the amount of money that I spend on a coffee is actually related to my ability to make it to the next Rodeo.

I only wish that Starbucks knew the kind of following they had in the barrel racing scene. Talking about Starbucks in the morning to a bunch of girls headed out to feed their ponies in their boots and pajamas, after spending the night in a parking lot in their trailer, is like talking to Paris Hilton about the newest diamond encrusted collar for her chihuahua. Their eyes become wider and more awake, they seem more attentive and all seems good. The horses will probably even work better that day. Why, because we have gotten our $5 Grande caramel Machiato. It never fails.

A couple of months ago while camping outside the show office of a major futurity with the who’s who of the futurity world. This western truism became more apparent than ever. If you have never been to a futurity in Texas or Oklahoma, please note that exhibitions/time onlies are coveted like gold. To ensure that you get one, you will need to start standing in line one to two hours before, that’s right, BEFORE the show office even opens. I made several trips to the show office at previous shows to stand in line and have them sell out of exhibitions just 3 people in front of me, before I realized the only way to guarantee that you are going to get one, is to get to the front of the line. This was much of the case at this show, we were all sitting there for hours (some in chairs, most sitting on the cold concrete floor) and enjoying it. It was fun, we laughed, and told great stories. Then it happened! Someone said it “Starbucks.” This is when one of the major well known futurity trainers asked her friends if they wanted Starbucks, she then took her closest friends order’s called her husband and then sent him on his way. I then realized that I have definitely not won enough in the Barrel Racing World because no one asked me what I wanted? Wow as if it’s not bad enough that the dang coffee is $5 bucks, now it even can be used as an indicator of your rodeo worthiness!

Hearing the orders was entertaining as well. One of the girls didn’t even like coffee, so she asked for a coke. Another, said I just want mine sweet, no cream stuff, “Make is black like Beyonce, with a little bit of shimmer,” she proclaimed.

I love my coffee, I even remember going on a trail ride with a friend years ago and nearly getting thrown off a colt after it spooked. My concern, “Save the Coffee.” Anyone in their right mind probably would have been more concerned with staying on the horse, but I guarantee you, if I thought I could get bucked off without dropping the coffee I would have been ok with that!

So Happy New Year and Merry Christmas to you all! May you have enough StarBUCKS and CENTS for your entry fees!