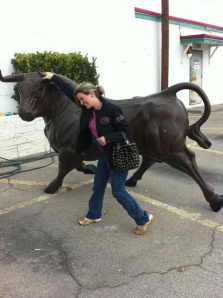 UGGGH!!! I can not get motivated. There are only 9 days till Christmas and the only thing I have done to get ready is call procom and enter a Rodeo 11 days away. I know, that has nothing to do with Christmas but for some reason it was at the top of my list. I know, I know…. shoot me! I’m guilty of putting my Rodeo Schedule ahead of Holidays, Again. The tree (fake of course, to curb my need to vacuum obsessively because of fallen pine needles), lights and decorations are all packed neatly in the garage daring me to leave them alone this year. When I talk to my other friends, most of them say, “Oh don’t do it if you don’t want to, you don’t have children, so you really don’t need to do it.” Which only makes me feel good for about 10.5 seconds before I realize that I’m turning 31 in less than 2 months and I DON’T HAVE  A KID!!!!!! But I only worry about that for about 5 minutes before I get over it. I mean lets be honest here, I have bigger things to worry about like, my horses protein content, muscle spasms, happiness and how I may have been about $40,000 richer today if she had decided to take four extra steps in the right direction last week. Oh well such is life!

So on a recent trip to El Paso, to deliver some race horses I stopped at the El Paso saddle blanket company to see if there were any neat things for christmas inside. Outside of the store there was a huge bronze sculpture of a bull. I immediately saw it as a photo opportunity that could not be passed up. My initial urge was to grab its tail, it reminded me of that financial company with the bull in the logo, I wanted to pretend like I was swinging it around my head, but that was hard to do considering the Bull was on the ground and so was I. I thought of jumping on his back, but how unoriginal is that. I was surprised that they didn’t have a sign that said “Don’t Ride the Bull, Dumbass.” So I grabbed it by the horns. I didn’t know why at the time, but it felt right. It was probably just my subconscience saying… “Hey Slacker, when you get home…. at least open the christmas cards you got in the mail.” When I got home, it became clear that “Grabbing the bull by the horns” won’t actually make someone magically appear to put your christmas lights up.

Good thing is, I actually own a ladder this year. Last year I put the lights up with a step stool. It’s amazing the things you overlook when your ex-husband says that he wants everything in the garage. It didn’t seem like a big deal at the time, until I realized that you need a ladder to put up the lights on your house.