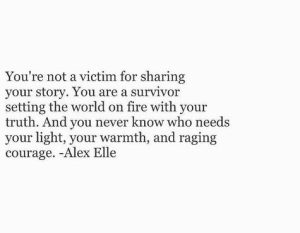 I’ve hesitated for years to write this post…but today is the day and not because anything revolutionary has happened or I have somehow figured out my place in this world or how people will react, but because I have waited so long to make sense of it all, I realize it will never make sense and I may never get the closure that I’ve hoped for my entire life.

Nearly two years ago, I vowed to begin writing posts on this blog that were more personal in nature and although that was my intention when I made that vow, it has taken me this long to even begin to write something down on paper. So many things have happened in my 36 years of life so far, that sometimes I don’t even know where to start. I don’t want to appear as a victim, because I don’t consider myself one. But I do know that my coping mechanisms may be slightly unhealthy. Those mechanisms including brushing things off and moving forward with a positive attitude. I’m resilient enough for it to work, but it’s come to a point where I feel like I’m this person who is moving through life viewing it through glasses that are scratched and blurry and I feel like everyone else has a different set of glasses that are clear. My glasses are scratched and blurry and I’ve been able to pretend that they are clear… I don’t expect this to change.

And so, it begins, the first real personal post….

If you ask me my life story I will likely give you a few highlights, because no one really likes the gory details and I will brush off your reaction when you gasp and your eyes get really big.

I will preface this by saying, I’m grateful for my life. I know I’m the person I am today because of these things and although I wonder who I would be if things would have been different, I know it really doesn’t matter.

One of my earliest most pivotal memories of my life was just a couple days before Christmas when I was 8 years old. I was pulling away from my friend’s house, in the back seat of a Los Angeles County Sheriff’s Department Bronco with two Deputies I had only met minutes prior. The two men had gone door to door with a picture of me in our rural town to find me. I’m sure they told my friend’s parents why they were taking me, but they didn’t tell me. I knew to listen to the “good guys,” so I went with them. As we drove down the dirt road, I asked them if my mom was OK. They said they weren’t sure. I asked them where my little brother was. They didn’t answer me. I asked them if Michael (Mom’s boyfriend) was OK.  They didn’t answer me.

They drove me to Children’s Protective Services where I was placed in a glass room with lots of toys. I stared at them. I knew, even at that age, that a normal child would have probably enjoyed them. I knew, that I didn’t have much interest in them, because something was very wrong, I should prepare for the worst.

Later that morning, my dad and older brothers came to pick me up. I’m not really sure who told me what happened, but the truth was that my mom’s boyfriend had shot himself in the head in our house while my mom lay next to him. He lined his head up with hers, the bullet traveled through his brain and lodged in my mom’s head just above her temple. He was dead. She was somehow still alive.

I remember a few things that day before I left to go to my friends. I remember him (Michael) screaming that he wanted to die and I remember my mom trying to console him. I remember her saying that she also wanted to die. The screams and tears came from their room behind a locked door. I remember knocking on the door and asking if my little brother and I could go somewhere for the day. I called my friend and asked if I could come over to her house and my mom told me that my little brother was being taken to his school/daycare. I think Michael dropped me off at my friend’s house that day. We didn’t really talk. I don’t think we had ever said more than a few sentences to each other. My mom was supposed to pick me up later that evening. When I got to my friend’s house. I never told them about the events of that morning and my friend and I played like normal. When my mom didn’t come for me, they just let me stay the night and put me to bed. The Sheriff’s Deputies showed up later that night after we had all gone to bed. I will never forget looking over my friend’s shoulder and seeing them hold up my school photo with the flashing lights in the background.

I’ve told this story so many times, it almost feels scripted. It still doesn’t seem real and although it doesn’t feel real, I know it is, because I’m real.

**Side Note** I wrote this post months ago, it’s taken me this long to even hit the publish button. I hope this post helps anyone who has ever suffered a traumatic event and lets them know they aren’t alone in their journey. I hope this post gives substance to future posts.